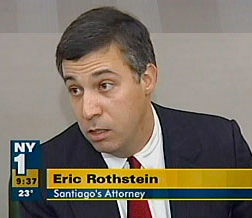 Prior to starting his own firm, Mr. Rothstein was the Managing Attorney at a firm where he supervised 13 attorneys and 13 support staff members.

Mr. Rothstein is licensed to practice law in the States of New York and New Jersey. He is also licensed to practice in the United States District Courts for the Southern and Eastern Districts of New York, the District of New Jersey and the Second Circuit Court of Appeals. Mr. Rothstein has tried many civil and criminal cases to verdict and has favorably resolved thousands of cases criminal and civil cases through trials, plea bargains and settlements. Mr. Rothstein has handled approximately 50 appeals in the First, Second and Third Appellate Divisions as well as the Court of Appeals for the Second Circuit.

Martindale-Hubbell gave Mr. Rothstein its highest rating – AV Preeminent – in the areas of Criminal Law, Personal Injury, and Litigation. According to Martindale-Hubbell “AV Preeminent is a significant rating accomplishment – a testament to the fact that a lawyer’s peers rank him or her at the highest level of professional excellence.” Martindale-Hubbell’s Peer Review Ratings reflect a combination of achieving a Very High General Ethical Standards rating and a Legal Ability numerical rating. A threshold number of responses is required to achieve a rating. The General Ethical Standards rating denotes adherence to professional standards of conduct and ethics, reliability, diligence and other criteria relevant to the discharge of professional responsibilities. Those lawyers who meet the “Very High” criteria of General Ethical Standards can proceed to the next step in the rating process – Legal Ability. Lawyers who receive the AV Preeminent status have been awarded the highest ratings for their professional ethics and legal ability by their peers. Fewer than 8% of attorneys achieve an AV Preeminent rating.

Super Lawyers, a Thomson Reuters business, is a rating service of outstanding lawyers from more than 70 practice areas who have attained a high degree of peer recognition and professional achievement. The annual selections are made using a rigorous multi-phased process that includes a statewide survey of lawyers, an independent research evaluation of candidates, and peer reviews by practice area. Each candidate is evaluated on 12 indicators of peer recognition and professional achievement. Selections are made on an annual, state-by-state basis.